This mod requires the following mods to function

This is a developer tool based package used to help devs easily configure UI Radial Menus.

Add text/icon menus that appear in centre of screen or slide out the right side. Support for multi-layer hierarchy.

This unofficial TaleSpire plugin is for adding custom light sources to your TaleSpire game. The custom light options are accessible from the mini radial menu under an new Light menu. Menu includes a None option to extinguish the current light. The plugin comes with a few sample lights but the plugin is easy to configure with your own light options and will automaticlaly enumerate those options in the radial menu.

Provides access to ambient, point and spotlight which can be placed at an offset to the mini and their intensity, range, color and angle (for spot light) can be set. 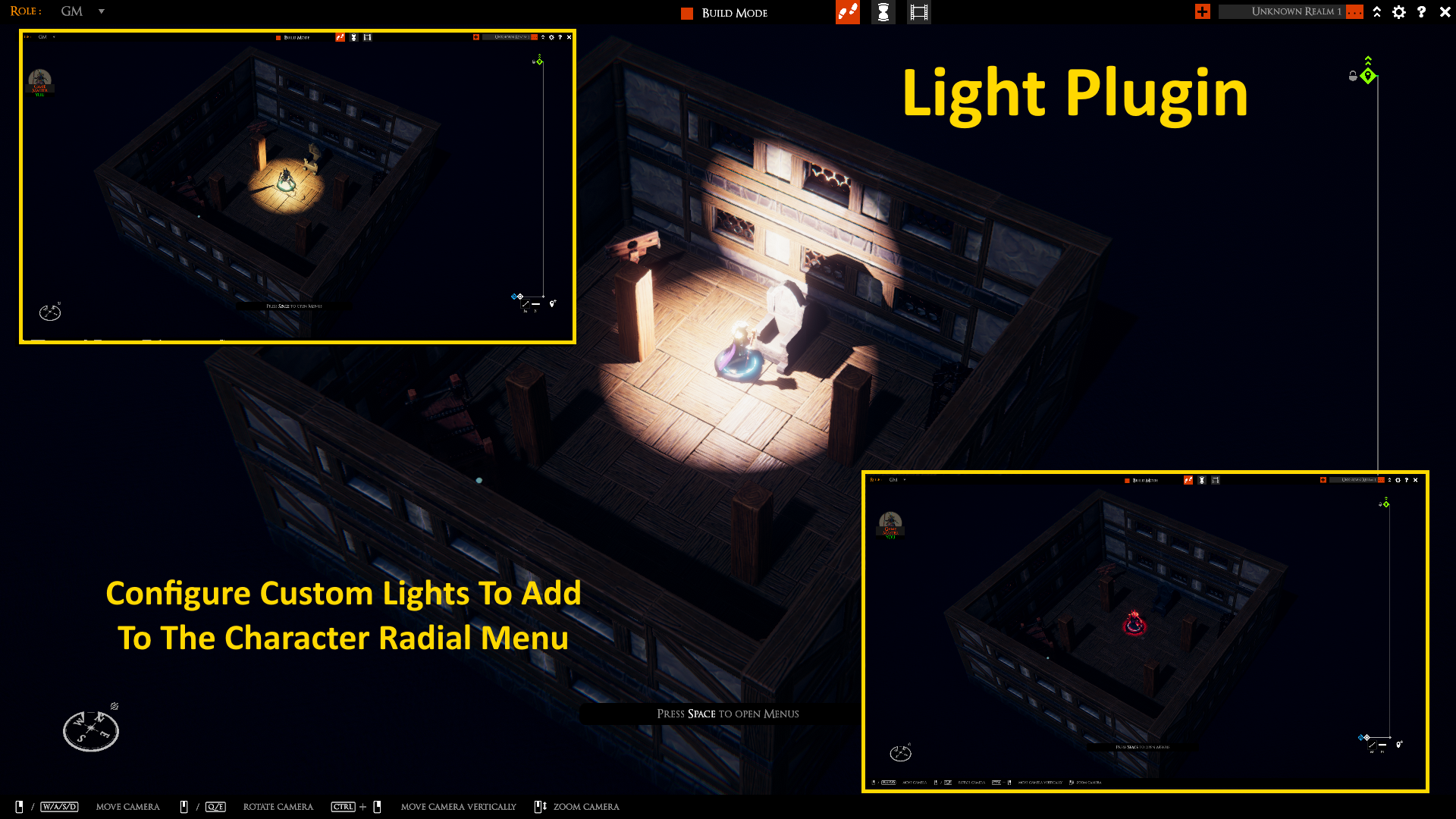 The plugin can be used out-of-the-box as soon as it is installed with the sample lights but typically the GM will want to configure his/her own light settings appropriate for the game.

Right click the mini to open the radial menu. Select the (new) Light menu. The sub-menu will enumarate all of conmfigured lights and includes a None option to turn off the light. Select one of the options to turn on the corresponding light. If a light is already on, the light will switch to the selected type. If no light is currently on, the selected light will be turned on. Select the None sub-menu option to turn off the light.

The number of lights and their effect, provided by the plugin, is completely configurable. The number of lights and their effects can be configured by modifying the LightTypes.kvp file which replaces the previous LightTypes.json file. The kvp is a non-standard file format but provide full access to the properties of the light object as opposed to a limited number of properties wrapped by the plugin (as was the case previously). The following outlines the format of the file and the common light object properties that were set in the previous version of the plugin:

Each line ends with a semicolor (;). This includes any lines with a comment.

Each light starts with the entry in square brackets which contains the name of the light, followed by a colon and then the type LightSpecs, such as:

This is followed by any number of entries for the specific light. The entries for each light have been grouped in sub-categries for easy categorization. The group are: menu, behaviour and specs.

The iconName property determines the name of the icon file to be used for the light.

The menuNode property is optional and determines which menu the light shows up if sub-menus are being used. If all iconNode properties are empty then all lights will show up in a single radial menu. If menuNode is set then the light when show only when that particular menu is being displayed (see below).

The menuLink property is optional and determines what menu is shown if the corresponding menu item is selected. This property is only used when using multipe menus (i.e. menuNode is set).

The onlyGM property is used to determine if players can see the corresponding light option or if it the light menu item is only visible to the GM. Please note this applied to the menu item and not the light itself. You can either make the link to the menu onlyGM in which case only the GM will be able to access that menu or you can set individual menu items as onlyGM in which case only those items will not be visible to players.

The sight property is used to determine if the light is only visible to the GM and the mini owner (true) or if it is visisble to all players (false). Typically used to implement various visions like darkvision.

The hiddenBase property is typically used with onlyGM lights to produce environment lighting like fire pits, lanters, chandeliers and other effects without showing the mini to which the light is attached. Saves the GM the step of having to hide the mini and also erases the name of the mini so that the name does not show up in the GM view (and clutter the screen in cases where there are a lot of lights).

The flicker property determines if the light is steady or if it flickes. There are two possible flicker effects. When set to true a light can use either flicker effect or both. When the values of intensityMin and intensityMax are different and flicker is true, the intensity of the light will shift to random values between the min and max intensity. When deltaMax is not 0 then light will also shift in the x and y direction, randomly, up to the deltaMax distance.

These properties are used to set the mininum and maximum intensity for a flickering light. When flicker is false, intensityMax will be used for the light intensity.

This property determines the position of the light with respect to the mini to which it is attached.

This property determines the rotation of the light with respect to the mini to which it is attached. The default value of 90,0,0 is a light that is pointing straight down.

The specs property is an list of Unity Light properties and their values. Any Unity Light property whose value can be JSON serialzied and JOSN deserialized can be added into the specs list with its JSON value. The above settings are the settings that were accessible in the previous version of the plugin with shadow being an additional property (previously hard coded to 2). It should be noted that while the value of specs is a JSON value, it is a array of strings, and not object properties, with each key value pair being a string in the array.

The range property indicates the maximum range of the light.

The spotAngle property determines the angle of the cone of the spot light.

The shadows determines the type of shadows produced. 0=None, 1=Hard, and 2=Soft.

There are two optional settings which can be used with light configuration to place them in hierarchical menus (menus with sub-menus) instead of the flat (one level) Radial UI menus. These properties are: menuNode and menuLink.

menuNode is used to indicate which menus the light belongs to. Each unique menuNode name is a different menu. Items (lights) that should appear in the same menu have the same menuNode. The main menuNode is always called Root. When the user clicks on the Light icon in the mini radial menu, it will cause the Root menu to be opened. The Root menu can contain a combination of light selections and menuLinks (which allow access to other menus).

menuLink is used to indicate the menuNode name of the menu that is to be navigated to when this selection is chosen. For a menuLink entry only the name, iconName, onlyGM, menuNode and menuLink settings are significant. All of the light settings are irrelevant for a entry with a menuLink since these entries are used to make navigation buttons as opposed to light selections.

Use As A Dependecny Plugin

Plugins which want to modify a light's properties can use the UpdateLight(cid, ls) method which updates a light to the specified LightSpecs. Such changes are not automatically propagated to other clients allowing a light to be adjusted on one device and then the final results to be sent to other clients.

Ls is the LightSpecs specification of the light (see above).

The modified lights configruation can be saved to a KVP file using SaveConfig(filename).

The new configruatin interpreter is capable of creating new objects on the fly and settings property values for any of its properties. This makes the interpreter very powerful because it means that if the Unity Light object is updated with new properties the Light Plugin will be able to make use of them without any update to the Light Plugin. For the Light Plugin this is not a big deal because the Light object does not have too many properties and thus the previous plugin version was able to wrap most of them and make them accessible. However, for more complex objects (like the Particle System) this is decrease the amount of work greatly becuase the plugin no longer needs to wrap each proeprty to expose it.

The downside of this is that it does, theoretically, introduce a security risk. Since the configuration can be used to create new objects and set any proeprty, it could be used to inject malicious code to make the plugin do something is should not.

However, in most cases this is not a concern because the configruation files being run is a local file and thus only a risk if you are running a configuration file created by someone else. Since you are already trusting Lord Ashes by running his plugin, we can rule out the concern that Lord Ashes will create a malicious configruation file so it really comes down to configruation files provided by other players. On top of that, it is really easy to see if a configuraton files is malicious. Open it up. If the configuration looks similar to the sample configruation with properties having a single values (or a list in the case of specs) then the file is okay. If, instead, any propety has what appears to be bunch of code slipped into it then it is probably a malicious attempt to do something odd.

In 99% of cases this is not a concern but I wanted to mention it since technically it is possible. I am not even sure you could accomplish with this exploit (if anything useful). So just double check the configruation if you are getting it from a 3rd party.

Please note that the install buttons only work if you have compatible client software installed, such as the Thunderstore Mod Manager. Otherwise use the zip download links instead.