This mod requires the following mods to function

This is a developer tool based package used to help devs easily configure UI Radial Menus. 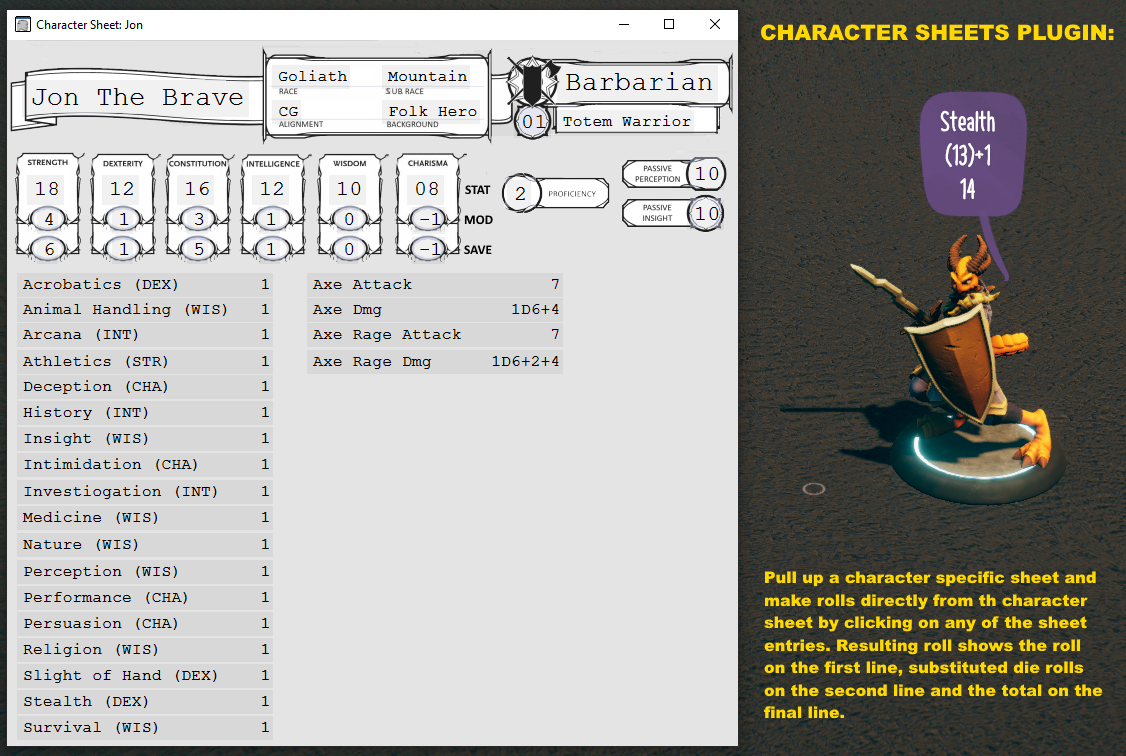 Sample character background, layout and character sheet is found in CustomData folder of the plugin.

Once the character sheet opens, any of the entries can be "rolled" by clicking on them. Static entries likes Name, Class, Race, Level, and Stats will just display the value to the chat (if open) and display the value in the mini's speech bubble. For actual roll entries like stat modifiers, stat saves, skills, attacks and so on, the corresponding roll is made and the results are displayed in the mini's speech bubble.

There are three files associated with a character sheet. One is character specific and contains all the character data while the other two are edition specific.

Character sheets are text files with one key/value pair per line separated by a equal sign (=). They are located in the TaleSpire_CustomData/Misc folder. The name of the file is edition.name.chs. For example: Dnd5E.Jon.chs The contents of file is just a set of replacement that will be applied. For example, the entry "stealth=1D20+5" would mean that when the user rolls stealth (by entering "/r stealth" into the chat) it will be replaced with "1D20+5" instead and then the dice will be rolled. Replacements are made in the order they are listed.

The following would cause the Sleep link to send "/lu Sleep" to the Chat which, if the Lookup Plugin was present, would trigger the Lookup plugin to look up the sleep spell. Note that at this point it is not possible to do both: a roll and pass-thru.

Layout files indicated the layout and content displayed on the character sheet. Layout files are edition specific with one layout file per edition. The name of the file is edition.CharacterSheetLayout.json. For example: Dnd5e.CharacterSheetLayout.json. The file is located in the TaleSpire_CustomData/Misc folder. The contents of the file are an array of visual elements. Each element can have the following properties:

{USERSLOTn}, {USERSLOTn_NAME} and {USERSLOTn_ROLL} are special entries which allow the common character sheet layout to be used be individual characters. A fighter may use the slots for various weapon attack rolls and damage rolls while a magic user may use these slots for magic rolls. If a {USERSLOTn} is not defined, it is not displayed.

Use the sample Dnd5e.CharacterSheetLayout.json as template to customize the character sheet contents and layout.

Please note that the install buttons only work if you have compatible client software installed, such as the Thunderstore Mod Manager. Otherwise use the zip download links instead.